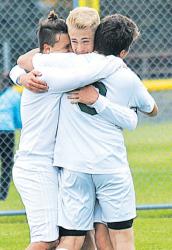 HUGHESVILLE — Their two goal lead was gone and suddenly the Wellsboro boys found themselves in overtime with South Williamsport on Saturday.

All the momentum late in regulation was in favor of South, but when the overtime started the Green Hornets took control again, scoring with under a minute left in the first overtime for a 3-2 win.

After regulation Wellsboro coach John Shaffer talked to the team and gave them a couple of choices.

"I told them in life there are two choices when you are faced with adversity," Shaffer said. "You can complain and look for excuses, or you can pull yourselves out of it. It's a bit of a life lesson that they pulled themselves out of it."

On the attack throughout the overtime period the Green Hornets got a penalty kick with 39 seconds left in the first overtime as South committed a hand ball on a corner kick.

"Our set pieces made the difference," Shaffer said. "We practice them and work on them. Good teams win with their set pieces. All of our goals came off of set pieces."

Tucker Worthington converted the penalty kick to give Wellsboro the win.

"I was thinking I better score the goal," Worthington said. "Not just for myself, for everyone."

Shaffer had confidence with Worthington taking the kick.

"Tucker is our PK guy, our senior leader," Shaffer said. "I know I was nervous, but I had faith he would do it."

After the ball went in Worthington stood there for a second taking it all in.

"There were definitely some tears," he said.

Wellsboro took a 2-0 lead in the first half as Dawson Prough scored just 3:05 in off an assist from Worthington and then he scored again off a Worthington assist at 10:38.

"That first one was just a perfect ball for Tucker on the free kick and then I was in the right place at the right time," Prough said. "Finally finishing a couple of these feels great."

Shaffer was happy to see Prough come up with a couple of goals.

"Dawson is an amazing athlete and we have been working for him to use that athleticism on the soccer field," Shaffer aid. "His dedication and learning of the game, I really admire it."

South fought back to tie the game. The Mounties cut the deficit to 2-1 with 18:05 left when Dominick Threeton scored. Donovan Keen tied the game with 8:02 left in regulation on a penalty kick.

"They are a great team," Worthington said. "You have to play at a high level the entire game."

After South tied the game the Wellsboro players knew they had to fight back.

"We had to be mentally in it after they fought back on us," Prough said.

Casey Hoover had three saves for Wellsboro and Connor Reasner had eight saves for South.

Wellsboro will play East Juniata next week in the semifinals.

"We are really excited," Prough said. "We want to go out and work hard and do ourselves and our school proud."

Shaffer is excited to see what the Green Hornets can do in the semifinals.

"We are excited for the chance to really see where the program is at," Shaffer said. "I told the boys 7-8 years ago the boys played EJ and they beat Wellsboro pretty bad. I told them this is a chance to show how much we have grown as a program."