Wyalusing falls to Huntingdon in first round of states. 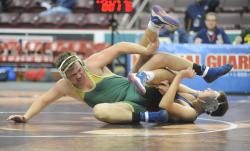 HERSHEY — There was a calmness strewn about Gary Haley's face. Inside, though, the Wyalusing head coach was stewing quite vigorously.

His Rams wrestling team lost four key toss-up bouts in the third period Thursday in the first round of the PIAA Class AA Team Wrestling Championships, and those four losses were paramount in Wyalusing's 44-24 loss to Huntingdon. The Rams fall into this morning's first round of consolations with the loss, where they face District 2 champion Honesdale. The Hornets are making their first appearance in the state team tournament and lost the opener, 65-6, to Reynolds.

Haley and assistant coach Walt Fisk had a pointed message for their Wyalusing team following the loss to Huntingdon: they had to wrestle better. It wasn't even close to the best effort the Rams (23-3) had put forth this year, and that's what left the coaching staff feeling empty after yesterday's match.

"We thought that in some matches we got out-fought, and there's no excuse for that," Haley said. "We had a couple kids get caught, but as a team we didn't work hard enough."

Wyalusing did the work it needed to do on its feet, holding a 16-9 edge in takedowns. Joe Doss was able to build a 6-4 lead in a toss-up bout at 145 pounds on the strength of three takedowns in the first two periods. But Doss was reversed to his back late in the third period and dropped a 9-6 decision.

Third-ranked Creighton Edsell built a 5-0 lead on top-ranked and state fourth-place finisher Seth Baney at 160 pounds thanks to two takedowns and an escape. But after cutting the deficit to 6-4, Baney hit a big move and pinned Edsell with 18 seconds to go for a key win.

Cody Tunnicliff allowed an escape midway through the third period at 220 pounds and fell, 1-0. And Logan Newton had a 5-2 lead in the second period before he allowed eight consecutive points in a 10-7 loss at 106.

All told, it added up to the Rams dropping their first-round match at the state tournament for the second consecutive year. Wyalusing trailed 32-24 with two matches to go, but gave up a fall at 120 pounds and forfeited to state-ranked Izac Benson at 126 with the match already in hand.

"Coming in we thought we had a great shot at beating Huntingdon. We liked our matchups with them, we just didn't wrestle well."

Edsell had Baney on the ropes for the first 3 1/2 minutes of their 160-pound matchup. Edsell, a returning state fifth-place finisher, scored his first takedown 16 seconds into the bout and rode out Baney for the remainder of the first period.

After escaping to start the second, he scored a second takedown with 1:05 to go in the period for a 5-0 lead. Baney got on the board with a reversal with 21 seconds left in the period. He added another six seconds into the third period to make it 5-4 before Edsell escaped to make it 6-4. But as Edsell tried to step over a takedown attempt by Baney late in the third, Baney hip tossed Edsell to his back and locked him up for a fall in 5:42.

It seemed to be a deflating loss for Wyalusing, and an inspiring one for Huntingdon.

"Baney is the type of kid, he's just so strong and physical and he just keeps coming," Haley said. "It's a tough one, but Creighton needs that type of match. He was looking forward to that match because it's been a while since he's been in a real battle, and I think that showed a little bit. But I think he's going to do well. He's disappointed, but in some ways he needed to be in one of those matches where he's going to go five or six minutes. He wrestled really well up until he got tossed."

The Rams were never really out of the match, despite the tough losses they suffered. Michael Wilcox pulled out a 3-2 win in tie-break at 195 with a tilt for two points. Dawson Otis needed just 45 seconds for a fall at 285 pounds to get Wyalusing within 29-21. And Kregory Johnson built on a third-period lead for a 12-6 win at 113 pounds.

But the late losses were just too much for Wyalusing to overcome.

"We've got to build on this. It wasn't acceptable," Haley said. "We have to get a couple wins (Friday). I think we have Honesdale first. We'll try to get by them and look to see who we have after that. But it's not good to come down here and go 0-2, so we have to come back (Friday) and fight harder."